There are four statuses that a meeting’s minutes can fall under in SmarterTrails.

Until a meeting has been called to session, it is still considered to be an agenda. Agendas are can be modified by anyone with Club Administration privileges. Public agendas can be seen by members in the Meeting page, while agendas filed as private remain invisible.

After a meeting has been called to session, it becomes an unfinished set of minutes. Unfinished Minutes can still be modified by anyone with administration privileges, but the members present can no longer be edited. Members who arrive late may still be marked as present while the meeting is listed as unfinished.

A meeting in the Pending status is generally awaiting approval by the club’s members. A meeting in this state’s items and sections can no longer be modified, but they can be amended. Doing so requires selecting a member who suggested the move and another who seconded the idea. Items in this state are most often left as such until the next meeting when they are approved.

After a member has moved to approve a pending meeting’s minutes and the motion has been seconded, the meeting is considered published. At this point, the meeting can no longer be edited in any fashion.

Calling a meeting to order will change it from a mere agenda to an unfinished meeting. While the meeting remains in this status, its minutes will be listed in the Unfinished Minutes category.

To call a meeting to order, you need only:

When a meeting is completed, you may mark it as such by clicking the Adjourn Meeting button at the bottom of the Meeting Minutes. 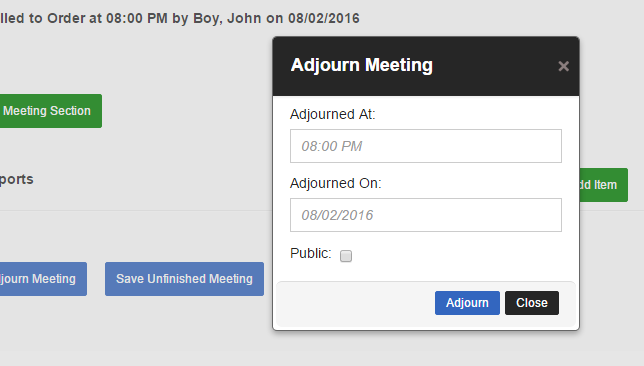